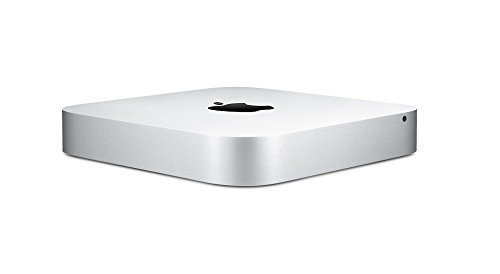 The Apple Mac mini «Core i5» 2.5 (Mid-2011/Aluminum Unibody) features a 32-nm «Sandy Bridge» 2.5 GHz Intel «Core i5» (2520M) processor with two independent processor «cores» on a single chip, a 3 MB shared level 3 cache, 16 GB of 1333 MHz DDR3 SDRAM (PC3-10600) memory, 512GB Solid State Drive, and AMD Radeon HD 6630M graphics with 256 MB of dedicated GDDR5 memory. It does not have an internal optical drive, although an external one could be purchased for US$79. Connectivity includes a Firewire «800» port, four USB 2.0 ports, combined «audio line in (digital/analog)» and combined «audio line out/headphone (digital/analog)» minijacks, a 10/100/1000Base-T Gigabit Ethernet port, 802.11a/b/g/n Wi-Fi, Bluetooth 4.0, an SDXC card slot and an HDMI port as well as a new «Thunderbolt» port that is backwards compatible with Mini DisplayPort and likewise supports an external display at 2560×1600 and passes an audio signal as well. Thunderbolt also supports other peripherals that use the Thunderbolt standard which provides up to 10 Gbps of bandwidth in both directions. Compared to its non-server predecessor, the most obvious external difference is that this model lacks an optical drive, but it also has the aforementioned Thunderbolt port and is a bit lighter. Internally, it also has a faster processor, architecture, RAM and graphics as well as improved wireless capabilities. All Mac mini systems are configured by default without a display, keyboard, or mouse, but numerous Apple and third-party options are available.